The Ramona Diary of SRD chapter is out on Label me Latina/o!!!

Posted on September 24, 2017 by scottrussellduncan

If you have an interest in my book and wonder what the non-memoir segments might look like (though I am spacey enough to say this didn’t not happen) check out the link to Label Me Latina/o.

The Head Joaquin is one of the first things I wrote for the novel.  The road to Ramona is paved with Joquines.

Here is the corrido (folksong) of Joaquin:

There is also a Joaquin PBS documentary by some New Yorker who investigated the gringo up north who claimed to have bought the head, which was saved from the rubble of the San Francisco earthquake.  The documentary ain’t out yet (I met the guy, he did a good one called The Longoria Affair about a civil rights fight to allow vets to be buried in white cemeteries).   I’ve researched Joaquin a bit myself for this book. It’s spurious, but not unheard of that someone took the head from the rubble, though many accounts said it was destroyed with everything else.

The other thing to remember is that Anglos beheaded many indios in the genocide (five bucks per head) as well as many other Californios and Latinos they might have labeled outlaws to get paid by the government which had a keen interest in getting rid of us along with the invading Anglos who had a keen interest in killing us for our land, mine claims, and gold.   So the gringo up north could have had a head, it could have been the one Captain Harry Love claimed was the head of Joaquin Murrieta, but it could be a number of heads from that period.

Problem is, who was in that jar?  Same thing goes, many a Mexican-ish head were getting cut off.  Captain Love was a shady Texas Ranger (a war criminal organization with a shameful past http://www.somosenescrito.com/2015/10/just-century-ago-war-against-mexican.html). He was good friends with the judge who posted the reward for Joaquin Murrieta, whom he selected out from several bandits named Joaquin.  I don’t know whose head was in that jar, but Joaquin’s girlfriend said it wasn’t him. And if you look at that drawing of the head, it looks more like the fanciful angry indio/mestizo drawings of Joaquin. Mix-raced people know that blood relatives can come out any color, but Joaquin was probably more criollo than mestizo.  His newphew, Procopio or, ahem, ‘Red Dick’ had red hair: 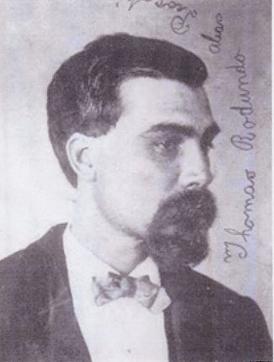 (A Spanishy looking dude. Heck I don’t look like all my uncles though. I used to help my Uncle Billybob in Texas with his house inspecting and all the realtors would look at me and ask, does he speak English? My uncle would say that is my nephew, Scott. The look on their face was sure, right, boy toy or Mexican slave or both).

There are tales that Joaquin returned to Sonora and lived out his life there, which his family and relatives there still claim.

I could be wrong…maybe that is his head and maybe it wasn’t some somewhat innocent mestizo Harry Love beheaded.  I even have a comic somewhere that advocates against praising Joaquin, he was a gangster. Yet, he is a symbol of Mexican-American resistance, even if there were others that might have been a better example.  Like some true Californios like Solomon Pico (an aristocrat who was even more Zorro-esque than Joaquin) or Tiburcio Vasquez (who probably ate at my family’s table).  These men either turned to banditry or were branded outlaws because the system of the invaders were against them, they wouldn’t stand by and be robbed with no recourse, and because they like fast-living, violence, and easy money.   These myths connect us and give us a precedent every time we have to put up with the Chicano condition of “being treated a foreigner in my native land.”

Chileans also worship at the altar of Joaquin: Pablo Neruda wrote a play on Joaquin called Fulgor y Muerte de Joaquín Murieta. Chileans claim Joaquin was from Chile…this might seem odd except during the Genocide Rush (Gold Rush) Chilean miners, like Sonorans, were particular targets…not because you could get five bucks for their heads like Indians, but because they had mining experience. They were better at mining.  At some point their camp in San Francisco was raided by an angry mob of Anglos and they were ‘cleared out’, a word that has to be a euphemism.  The Chileans linked up with the resistance myth of Joaquin…though the book about him, why everyone knows him, was intended to give people (which probably only means Anglos)  of San Francisco a unifying legend, a Robin Hood.  It if had been meant as a rallying cry against the US, every indio or Latino with a copy would have gotten their hands chopped off.  Strangely enough the author was a half Cherokee, half-Anglo who was embittered against Native people. The Life and Adventures of Joaquin Murrieta is the first Native-American novel, though.  It all comes together in California.

This entry was posted in Uncategorized. Bookmark the permalink.